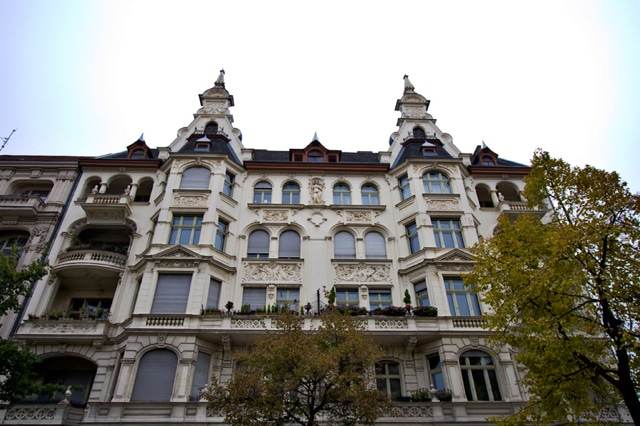 The property Hauptstr. 134 in Berlin Schöneberg is a listed Berlin apartment building, built around the turn of the 19th and 20th century in Art Nouveau style. The house consists of a front building and two side wings and has three entrances. Behind the house is a courtyard, which can be used and accessed by all parties. The building is not far from Heinrich-Lassen-Park and Rudolph-Wilde-Park. The Schöneberg town hall, the Odeon cinema, the Schöneberg village church and a library are also in the immediate vicinity. At the nearby intersection with Albertstraße, you can look east to Schöneberg's old gasometer. In the founding years, the main street was the most important commercial street in Schöneberg (and was formerly called Friedenauer Straße). The surrounding area offers numerous shopping opportunities (for daily needs) as well as attractive leisure activities.

The property Hauptstr. 134 impresses with its extravagant Art Nouveau elements in the façade area as well as in the interior design. The present elements are designed and formed in the forms of Art Nouveau down to the last detail. The old tiled stoves in the most beautiful colour variations, wood panelling in the individual rooms, magnificent stucco ornaments as well as elaborate parquet floors turn this stately apartment building into a total work of art.

Lovers of Art Nouveau will find an incomparable setting for a new home for well-being and stately living.