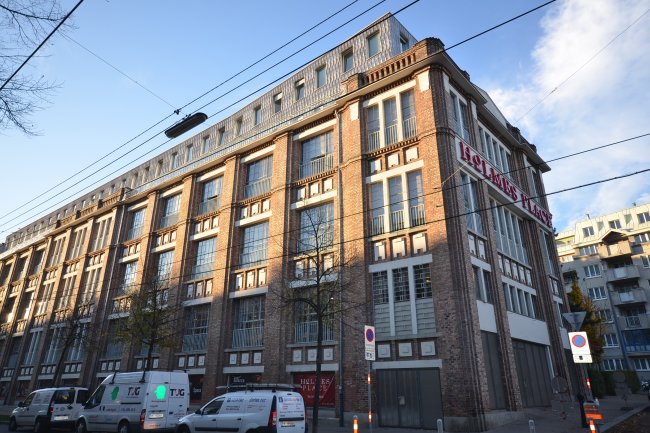 The listed eastern part of the former larger factory complex was built in 1909/1910 according to the plans of architect Franz Sobotka and revitalised and extended in 1991. The property was initially home to the Austrian-American Gummiwerke AG. In 1930 the property was taken over by the "Großeinkaufsgesellschaft Österreichischer Consumvereine" and converted into the "Neue Schneidereigebäude". Over the years, the building was put to alternative uses.

Today it serves as an office building that also houses a fitness centre. The elongated skeletal concrete building has dominant exposed brick cladding with post-and-beam articulation and neoclassical decorative elements.

It has a ground floor and 3 full floors in the old building, with dense pillar positions and beamed ceilings in keeping with the concrete skeleton structure. The staircase is characterised by its triangular ground plan with a two-flight staircase and its graceful iron grilles. During the revitalisation and extension of the old building in 2003, the head building was given a recessed, two-storey roof structure, which was executed as a steel construction with prefabricated concrete walls. The roof was also covered with cast aluminium panels structured in relief with plant motifs. Furthermore, a basement was added to the building complex.